McMullin preferences back in the race 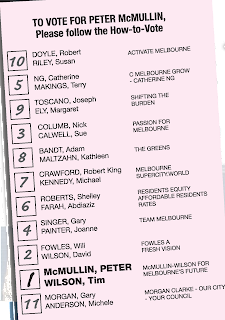 Peter McMullin, faced with Robert Doyle not delivering a dodgy preference deal has backed down and reallocated his recommended preference distribution. Punters are expected to receive the new Preference How-to-vote card in the mail next week. 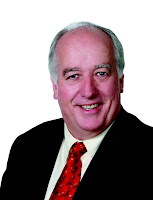 Whilst this is a good move on McMullin's part, and it does help restore the balance, the damage is never the less done. Most voters rely on the published statements and preference allocations provided by the VEC sent out with the vote. These will not be changed.

McMullin is struggling to gain a foot hold in the race but it is still early days and he may yet catch the palleton and make a sprint for the finish. Meanwhile Robert Doyle has received negative publicity over his love of the grape and fine wine. He is regularly reported to be sitting alone in Restaurants getting drunk on the local hospitality. problem is he favours Albert Park not Melbourne.

MELBOURNE mayoral candidate
Peter McMullin has made an embarrassing
back down over a preference
deal for this month's city election.

Mr McMullin was earlier this week
accused of reneging on a preference
swap deal with rival Nick Columb.
But Mr McMullin said yesterday he
would honour the original agreement.

His how-to-vote cards will give Mr
Columb's Passion for Melbourne ticket
his third preference.

But it is too late for anyone who will
vote above the line on the ballot paper,
which will automatically trigger the
preferences that were locked in with the
electoral commission on Monday.

Under the latest deal, Robert Doyle
will drop from third preference on Mr
McMullen's ticket to 10th.

Getting more revenue from parking
meters and fines would fund the estimated
$5 million shortfall.

"Parking in the city has been inefficient
for years due to unacceptably high
parking meter downtime and enforcement,"
Cr Singer said.

"Inefficient operation of parking meters
is costing the council millions each
year — money that should be returned
to ratepayers."

His pledge follows a promise by
election rival Gary Morgan who wants
to slash rates by 5 per cent.

Mr Morgan said there was room in the
council budget to cut costs.
Posted by MelbCity at 23:08