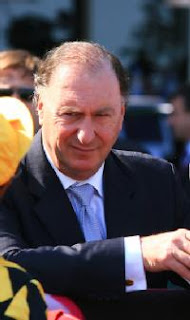 Nick Columb: In the race for lord mayor.

LORD mayoral aspirant Nick Columb might choke on the comparison, as he's no fan of the incumbent, but there's more than a touch of the John So's about his own history. Both are the sons of wealthy businessmen whose fortunes were lost to the march of communism — in So's case, it was the 1949 Chinese Revolution, while Columb's inheritance vanished when the Russians arrived in Romania at the end of World War II.

So's family were insulated by some investments that underwrote a new life in Hong Kong. The Columb family also fled to a new country, using the last of their money and connections first to buy his father's way out of a Bucharest jail in 1946 — "one key at a time" — and then to furnish a railway car with a secret compartment in which father, mother and infant Nick hid for the ride across the border to Austria, later travelling to France and, eventually, Australia.

John So and Nick Columb both ultimately capitalised on capitalism, accumulating new fortunes with the single-mindedness of so many migrant sons. But while So, who arrived in Australia as a 17-year-old student, never did get a handle on the language, Columb, who landed at Station Pier as a four-year-old speaking "Romanian, German with an Austrian accent, and French", lost no time acquiring a firm grasp of the Australian vernacular. "Get f---ed," he was famously quoted as telling a turf writer who second-guessed his horse Imposera's narrow 1988 Caulfield Cup win as he bolted to the mounting yard to collect the trophy.

Finally, John So was also considered a rank outsider for the job of Lord Mayor when he first won it in 2001.

Now the migrant melting pot of Melbourne has thrown up Columb as one of the 11 starters in the race to replace So in the job. "I think I'm a rough chance," says Columb over coffee at Southbank, a stroll from the city apartment that's been the nexus of his move into city politics.

In truth, he's more fancied than that and in terms he can appreciate. According to Sportingbet he's gone from 11-to-1 odds to now be ranked in third place behind the favourites — Labor-backed Geelong councillor Peter McMullin and former Liberal Party leader Robert Doyle. And no, says the long-time punter, he did not put money on himself, though he does admit to putting about $25,000 into his campaign.

So who is this dark horse?

Columb, 62, is no household name, though he's a player in sporting and business circles. Most of his adult life has been preoccupied with making money, losing it, and making it again. And with horses. He spent almost 20 years as chairman of the Thoroughbred Owners' Association. The only position he has held that might approximate to public office was as president of the Footscray Football Club. But as the man who signed the failed merger with Fitzroy in 1989, for many supporters his era was less than glorious.

Columb says his involvement with Footscray dates to his earliest days in Melbourne. The father of one of his kindergarten mates played for the reserves. "His mum would take Chris and I to the footy, and we'd watch his dad and meet Charlie Sutton and Teddy Whitton and all those blokes who became my heroes, and later in life became my friends. I remember going home to my mother and saying, 'I need you to knit me a jumper, red, white and blue'." She did, but got the colours in the wrong configuration. "I cried and cried apparently. She unravelled the jumper and she knitted it again."

Columb loves to spin a yarn, especially one that draws on the rich pickings of a varied life. Telling stories was his trade for a brief while, when he was a cadet journalist at the Herald, until his editor suggested he might be better off seeking his fortune somewhere other than newspapers. After a journey through public relations, he made his first pile capitalising on the '70s penchant for handicrafts by setting up a fair selling the wares of Eltham artisans out of a stadium in Albert Park. "In three days, 57,000 people came through, and they paid me $2 each. The chairman of BHP wasn't making that sort of money. So I was off."

It spun into a deal to manage and sell space on the prize wheel for Channel Nine that endured from the days of Graham Kennedy right though to Don Lane, and then to music expos that brought the youth market into the Exhibition Building in droves.

The empire grew to a pub, private hospitals and the magnificent Morning Star estate at Mount Eliza. Then, when the economy hit the skids in the early 1990s, the banks revalued the assets, called in the loans and it all fell over. "I went to bed a rich man, woke up a poor one."

He started over again, and in the past 15 years property development has largely underwritten a financial recovery, though never, he says, back to the scale of his earlier empire. Throughout it all, his distraction and passion were his horses. He's had 17 group one winners over the years. "I grew up watching horses and watching the old man have a bet, and that was where I guess I got the bug."

Why now, in his 60s, a different race? He says he's worried about city safety — "where I live, I hear screams, I see fights. It's not a safe city … As a 62-year-old, I can't walk up to town to have a plate of pasta and walk home at midnight. I can't."

He's also concerned about what he sees as the erosion of the power and relevancy of Town Hall, and the party political plays that occur there. Which is why he says he's putting his hand up for the job, as an independent.

His ticket essentially gave his preferences to Labor's Peter McMullin, and he was expecting a similar arrangement in return, which didn't happen. McMullin apologised. "That's like stabbing someone in the back and when you notice he's still alive, offering to pay his hospital bills," Columb said.

While he continues to deplore the party games, there's more than a touch of relish in his engagement in the city street fighting.
Posted by MelbCity at 13:27