Bring out the clowns 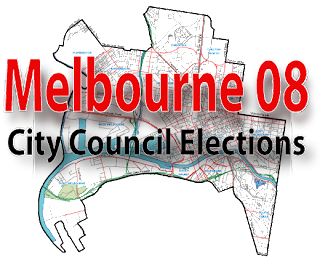 The following are assured a seat in the Council Chamber


Ken Ong is expected to win a spot on the Council if the Doyle "Active Melbourne Ticket" polls less then 23% of the vote. Ken Ong picks up the surplus from Peter McMullin/Ken Louey's team (Assuming Jane Shelton is excluded first) ahead of sitting Councillor Fiona Snedden. If Doyle's team polls more then 23% then 70 year old Carlton Lawyer and former ALP member Luciano Bini will be elected instead of Ong. One scenario which had Peter McMulin above 16% showed McMullin's Jane Shelton winning over Ong and Bini. We had factored in a 5% Ong vote but some punters say he will poll less (estimated at 3.5%).

The main winner in the Council election will be John So's refugees who are likely to win 4 out of 7 Council seats (Jetter, Ong, Shanahan and Louey) If either Catherine Ng or Robert Doyle win the Lord Mayor's election John So's team will directly influence six of the overall nine council positions.

* There is a conspiracy theory that Jeremy Simpson, John So's Strategist, has played all sides of the political spectrum by placing his team members in each of the camps.

If voting below the line for the Council (7 positions) we would advocate a first preference for Jane Shelton. Jane has the experience and credentials to be our candidate of choice from a Labor Party perspective.

If voting Liberal then we would advocate a vote for Fiona Snedden.
Posted by MelbCity at 18:44

Reopening Swanston street will be a travesty.