Melbvotes: Voter Turn out and 27% of electorate to decide outcome of poll

With one hour until the polls close voters in Melbourne are rushing to vote to avoid a fine. Voter turn out is expected to be lower than in 2010.  Each of the main parties Labor and Greens are elected to poll around 32%.  The big unknown factor is where will the 27% who voted Liberal place their vote?

A low turn out is expected to favour the Greens. Liberal Party supporters have been left high and dry not knowing who to support.  Many will opt to vote informal or may transfer their vote to the conservative  Christian Groups.  Many Liberal voters are weighing up their choices "Greens versus Labor". Many will cast a blank ballot and a considerable number will vote down the ballot 1 to 16 starting from the top.   A high informal vote and low participation rate will boost the Greens chances. Independent Liberal David Nolte (Unendorsed) is expected to pickup a large swag of the Liberal Party vote.

There are a host of rat bag socialist, looney left, green left and "independent candidates" who are actively trying to win over a few votes (together they will represent less than 3% of the overall vote most if not all will lose their deposit).

Labor and Green preferences will not be distributed but all other candidates will.

So who will be left standing and who will get their deposit back?   Those who are set to have their deposit returned are Berhan Ahmed (top of the ballot), David Nolte, Jennifer Kanis (ALP), Michael Murphy (DLP), Stephen Mayne, Fiona Pattern (Sex Party) and Cathy Oke (Greens) The rest are just stroking their egos.  As one egocentric left candidate on the booths tried to make out that if the result is determined by 20 votes they will have been the king maker, which of course will not be the case.  Most if not all the minor parties with the exception of the Christian alliance can not direct preferences. 40% or more will stray. The donkey vote, low voter turn out and level of informal vote will be the main decider.

We should know the overall results of the election by 7:30PM once the first three booths are declared. 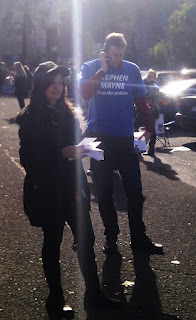 Stephen Mayne has had a lower than expected support.  Unable to to man the polls fully, Mayne's campaign has failed to bite.  Mayne is seen overall as a spoiler anti-labor trouble maker candidate, whose sole aim is to feed preferences to the Greens in exchange for Green preferences in support of his opportunistic bid for the City of Melbourne Council election in October.  In spite Mayne's feeble and misleading attempt to portray himself as a Liberal Candidate by wearing a t-shirt in Liberal colors, Stephen Mayne has been challenged by Family First, the DLP and Independent Liberal candidate David Nolte.  Mayne is expected to poll below 10% and possible as low as 6%.

Poll workers are reporting a lower then expected turnout which may favour the Greens. There is a lot of resentment towards the Green's open door policy for people smugglers which has highlighted their inability to play a constructive roll in government. Even Cathy Oake was trying to play down this issue during the Friday media door stop. Overall poll workers are saying there is a better mood at the booths then in 2010. 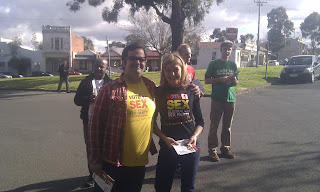 The Socialist party and other minor feeder groups including the now defunct and unregistered "Australian Democrats" are actively trying to direct preferences to the Greens but they are being eclipsed by the more conservative Christian groups (DLP, Family First and Australian Christians - The Holly Trinity) are silently and effectively campaigning  away.  All three have successfully maned each polling place.


The Australian Sex party has also manned each booth but they are not as active in their campaign.  The Sex Party which trades mainly on its name, unlike the  Conservative Christian groups, will not be able to direct preferences.  The Holly Trinty are expected now to out poll trouble serial candidate Stephen Mayne.
Posted by MelbCity at 15:25 No comments:

A low participation rate will play into the hands of the Greens who are battling to win the inner City seat from the ALP. Up for grabs is 28% Liberal Party vote.

The Liberal party has not endorsed a candidate in this election. Liberal member and order city of Melbourne Councillor and local pharmacist David Note is vying for Liberal Party members vote. Competing against David Nolte is maverick and controversial serial candidate Stephen Mayne. Steven Mayne's votes a crucial to the Greens chances in winning the seat. 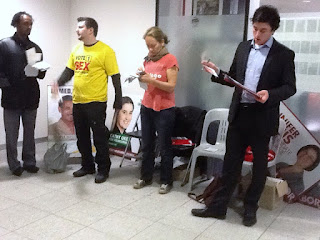 If Mayne is able to survive the count and out-poll Nolte then Mayne will pick up Nolte's preferences. Mayne however has not reciprocated Nolte's support, Mayne's preferences will flow on to the Greens which could see them come tantalizing close to winning the seat. However if Nolte manages to man the booth and the voter turn-out remains high then the ALP stands a good chance to retain the seat with an expected win by 2% to 3%.  Mayne's recommended preferences will not hold with an expected drift of 33% to the ALP ahead of the Greens.

he DLP is expected to collect preferences from other Christian groups and provided they can stay in front of the donkey vote they will be a contender for Mayne. The estimated percentage of Mayne's votes range from 4.5% to 9%.  Noltle would need to attract most of the Liberal Party support base and he is pitching to win 15% + overall.

When combined with the Anti Green vote and the Sex Party the ALP should be able to scape home the victor. The Donkey vote and inverse Donkey vote (where voters select their chosen party then preference from the top of the ballot down filling in the blanks) is expected to benefit Nolte and then flow on to the ALP.

Given the number of minor candidates running the Green Primary vote is expected to fall. In the end it will be a close election but the drift in Preferences will not favour the Greens. We should know the outcome of the election after the results of three booths are recorded. ( At about 8PM) this will indicate the strength of each party and the swing in preferences.

Whilst the election will be influenced by Party branding and national issues the end result will be played out on local issues. TAFE, health and public transport and planning being the main focus.

Those voters that are influenced by national issues are already determined and very few are swinging voters.

The Greens have come under a little more scrutiny since the 2010 election and cracks are beginning to appear in their brand image, which is tainted by local influences. North Carlton residents have had to endure Greens on the City of Yarra. High rates and poor quality local services are all negatives to the Greens bid to win the inner city state seat.

North Carlton will be a seat to watch. It is also te district that David Nolte is best known. The Greens will do well in Kensington but not as well in neighbouring Flemmington.

The electoral map of the Melbourne electorate will be redrawn as the demographic changes in the. Inner city begin to apply their influence.

Over the last two to three State elections there has been a noticeable shift in Liberal Votes up from 19% to 27% in 2010. It is for this reason that the Liberal party supporters will decide this by-election and much depends on who they will support in the absence of a Liberal Party endorsed candidate.

Voting is compulsory and those who do not vote will be subject to a fine.

It is for this reason that we expect the Donkey vote to be the highest in recent times. possible as high as 7%

Overall we believe that push come to shove the ALP should be returned. Voter's wishing to maximize representation in Melbourne should place the Greens and Mayne last.
Posted by MelbCity at 15:38 No comments:

Self advocate and serial candidate Stephen Mayne has entered in a grubby preference deal with the Greens in order to secure the Greens support for Mayne's tilt at the City Council elections in October.

Both the Greens and Mayne have placed the Christians (Family First- Australian Christians and the DLP) last.

Mayne's cynical move has brought Nolte's campaign to an abrupt holt.  up for grabs in the election is the 27% Liberal party votes that were recorded in the 2010 ballot. Both Mayne and Nolte hope to attract the support of liberal Party voters.  Whilst David Nolte is the only member of the liberal Party standing in the by-election offically the Liberal party has not endorsed any candidates.     Mayne picks up preferences from a host of rat bag socialist candidates but misses out on the Family First and DLP vote all which favour Nolte ahead of Mayne.  if Mayne can survive Nolte, his main rival Mayne will then go head to head against the Greens in what could be a three way battle.  Labor's candidate Jennifer Kanis is well placed on preference picking up most preference allocations ahead of the Greens The greens are 100% reliant on Stephen Mayne for any chance at winning the seat. Local polls show that it will be a battle between the greens and the ALP with the ALP maintaining a home advantage.

The defunct Australian Democrates have abandoned their policy of a balanced how to vote card and have preferenced Mayne ahead of the Greens. Sex Party, which is expected to poll around 4-5% have preferenced the ALP behind David Nolte.  If Notle, who also benefits from the Donkey vote, out polls Stephen Mayne, Stephen Mayne's show comes to an abrupt holt. Mayne is expected to poll around 7% and (backed by the likes of Jon Faine, ABC radio) will take votes away from the Greens and partially the Liberal Party. in the absence of a liberal party endorsed candidate the donkey vote is expected to be much higher in this by-election, possible as high as 6% and could play a decisive roll in the outcome of the ballot