The Herald Sun has reported that the City Council administrators have spent over 250,000 on overseas junkets this year. This is the tip of the Ice berg as many Overseas junkets have been hidden.

The City Council administrators also have another scam going which we reported on earlier. They ring up large sums of Council expenditure on their "personal" credit cards and have the Council pay off the cards but they collect massive QANTAS Frequent Flyer Points in the process. QANTAS has become the under the counter bride Airline. If it's not trying to bribe Police commissioners it is being used as a way of laundering corporate/government funds without fringe benefits tax. As the saying goes there is no such thing as a "free flight" lunch.

Council must put an end to the QANTAS Frequent Flyer scam but with Staff and Councillors all invloved there is little to no incentive to stop the rort which includes those at the top. QANTAS holds its Annual General Meeting on Friday in Brisbane. 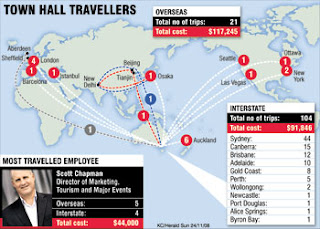 JET-SETTING Melbourne City Council bureaucrats have spent more than $200,000 on overseas and interstate travel in just nine months this year.

The Town Hall staff have even earned frequent flyer points, racking up thousands of personal credits from the ratepayer-funded trips.

Melbourne's most-travelled employee is commerce and marketing director Scott Chapman, who has made five overseas and four interstate trips this year.

In total, he spent more than a month away from Town Hall.

Melbourne was also represented at trade and investment forums, and also helped to secure the Jersey Boys theatre production for Victoria.

Kevin Louey, Lord Mayor John So's chief of staff who is now running for council, flew to China, India and Japan on the city's Asian mission.

AN expert in IT flew to Las Vegas for an "online virtualisation conference".

A RESEARCH manager ran up a $6378 bill for a one-week jaunt to a "international regions benchmarking consortium" conference in Seattle.

ALMOST $15,000 was spent on sending community and culture director Linda Weatherston to New York to share information on homelessness.

The Town Hall staff total of $209,091 covered 125 separate trips between January and September.

Some trips were paid or part-paid by conference hosts, not the council.
Posted by MelbCity at 10:09