Bronwyn Pike is expect to hold on to the seat of Melbourne withstanding an atack from the Greens. The reens maanged to out-poll the Liberal Party who at a last minute decision called on its supportes to place the Greens ahead of the ALP. The Liberal Ticket di not hold with a considerable drift of Liberal Party and Family First preferences see Bronwyn cross the line with a 1.5% margin. Missing was information on the number of postal ballot papers issued before election night (See below) The final results of this election wil not be kbnown until sometin next week after all postal and absentee votes have been account. Unfortuneatly not knowing teh fuill extnet of the number of postal votes means that there is the risk of a mysterious bundle of 509 vbotes or more unaccounted for. A fact that thw Chief Commissoner, Mr Tally and the VEC Manager of Electoral Services, Glenda Frazer, should be held accountable for.

Bronwyn Pike is expected to win this seat and hold on to her 2002 result.

Environmental activist and ALP Federal spokesperson on the Arts, Peter Garret's involvement in the election was a welcomed and valuable contribution to Bronwyn's campaign maintaining the ALP's credentials as the party best to manage the environment, work relations, and economic development.

The election was marred by Chief Commissioner Mr Tully who refused to provide statistical information on the number of postal votes issued (a document that is not confidential and in the past this information was readily available - see posts above) bringing both the VEC and the election into disrepute. Victorians and the new Parliament need to ask do we really need two public electoral offices duplicating what is essentially the same services at considerable cost to the state and the public purse. Judging by Mr Tully's performance the answer is no.

The Age today reports a massive swing towards the Greens in inner city seats with the Greens reportedly obtaining 40% of the vote (3 party preferred -The 40% Greens includes votes for Kevin Chamberlain that flow to the Greens). If reports of a 40% Green vote is true then the seat of Melbourne could change hands but is not a guarantee with an expected drift of preferences from the Liberal Party and Family First candidates making it a tight finish).

The strong support for the Greens in inner-city electorates is also of some discomfort to the Liberal Party whose vote in the inner city has also been eroded. The Liberal Party could suffer in Kew and in Hawthorn where the increase in Greens support has also pegged back the Liberal Party in what may very well become a Green/Liberal contest.

Its not a protest vote thats at stake.

Andrew Landeryou reports in more detail on the Greens agenda and the Melbourne vote.

The Herald Sun reports that the Liberal Party have opted for opportunism ahead of Victoria's business and economic interests in striking a preference deal with the Greens to place the Greens ahead of Labor in exchange for the Greens issuing a split ticket in a number of rural seats. This deal places the Greens back into contention for the seats of Melbourne and Richmond and possibly Northcote. This deal shows up the Greens for what they are and also brings tension within the Liberal Party/Business relationship.

In contrast to the McNair Poll (see below) Chanel Nine's 'Morgan Poll' indicates a different yet similar result. Morgan retains the ALP on 43% and shows a drop in the Liberal/National Party vote (38% down 2 percentage points from last week) but worriing for Labor is that the Morgan Poll also shows a strong consolidation of the Greens (13% up 5% percentage points from last week) at the expense of all other minor parties.

The Sunday Herald Sun published a recent McNair Gallop poll which (contary to all other polls except an earlier auinday Herald Sun Galaxy Poll) reports a major shift in voter intentions and an unexpected reversal of the expected vote. If the Sunday Herald-Sun McNair poll is true then this is going to be a very close election indeed with the unexpected possibility that, as a result of the Liberal Party's preference deal, the Greens could play a major role in the formation of the next State Government. Again this poll is not backed up by credible results or independent analysis.

Labor's Bill Shorten has written an opinion piece on the need to elect a Labor State Government as the only means of ensuring necessary checks and balances against a Howard Liberal Party dominated Federal Government. 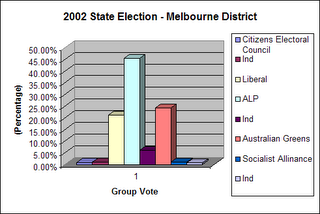 Note: In 2002 Kevin Chamberlian, former Lord Mayor and ALP local councillor stood as an independent against Bronwyn Pike, Kevin Chambelian attracted 5% of the primary vote which when distributed split between the ALP and the Green vote.

2004 Senate Election results:
(Note: Senate statistics is provided as information only to maintain consistency in the information published. The senate vote does not accurately reflect the possible outcome of the district vote) 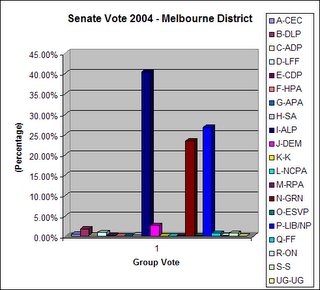 The ALP has held the seat of Melbourne since 1955. The current member for Melbourne is Bronwyn Pike who was elected in 1999.

The Greens Candidate, Richard Di Natale, is the only other candidate running that could win the seat (see below)

The 2002 State vote was the second highest vote recorded for the Greens Party. The Greens failed to capitalise on its support in this electorate with its primary vote dropping 1% to 23% at the 2004 Victorian Senate election. Unless the Greens campaign well and secure all available minor party preferences (see Family First below) the Greens will not win this lower-house seat. We will know the likely outcome next week when registered HTV cards are finalised.

If the Liberal Party do not cut a deal with the ALP then local issues and a change in demographics could see a crucial shift away from the ALP at a time when the ALP needs all the support it can get to hold on to the seat.

One issue that has attracted strong support in the north west of the electorate is a local campaign to re-unite Kensington with the City of Melbourne. Kensington was split and half of the local community was annexed from the City of Melbourne by the Kennett Government as part of its local government reform soon after it took office in 1996. This issue also effects Carlton North, also in the Melbourne electorate, but residents in this area have not been as active on this issue as in Kensington.

Kensington residents claim 90% support for their policy of rejoining the City of Melbourne. we are not a sure if this includes the public housing estates which is traditionally support the ALP.

A public meeting organised by the Kensington Association is scheduled to be held on Wednesday November 15 with the State Election being the main topic of consideration and contention. All candidates have been invited to attend.

Last month Melbourne City Councillor, Peter Clarke - Liberal, proposed the creation of a Greater City of Melbourne which if adopted would see Kensington re-united under the Melbourne City Council's expanded boundaries. The proposal by Cr Clarke was rejected following a divided 4-4 vote in the Council but defeated by John So using his casting vote placing the issue on hold but still in play.

The seat has also had a significant demographic shift in population with Docklands one of Melbourne's most expensive and newest residential precincts within the Melbourne electorate.

If the Liberal Party's vote increase and they rise above the Greens vote then the ALP will retain the seat of Melbourne with preference from the Greens Party who will be eliminated from the count before Liberal preferences are distributed.

As stated above if the Liberals preference, along with all other candidates, the Greens ahead of Labor then it could in theory be a close race.

It is not known how well Family First will go in Melbourne or if they are planning to campain hard in the Melbourne inner-city electorate. (In the 2004 Victorian Senate election Family First polled less then 1% of the vote). If Family First do campigan strong then it can be expected that their vote can only benefit the incumbent Labor candidate who also has a strong christian church background. If it gets down to a Greens vs ALP contest then every vote will count. Comforted by the fact Family First will prefernce Labor ahead of the Greens, Bronwyn Pike last month fired a broadside attack against Family First, in what was seen as possible insurance and a way of shoring up the pro-ALP/green inner-city environment lobby.

In attacking Family First Bronwyn seeks to distance herself from a possible backlash arsing from the ALP's 2004 Senate preference deal which saw Family First elected as one of Victoria's Senate quotas.