Richard Wynn won the seat of Richmond following a strng and excellant grass roots campaigning on the ground. The VEC continued to count the vote on the night with an assessment of the TPP result being a contest between the ALP and the Greens. Richard Wynn who polled 48% of the primary vote (56% TPP) will comfortable win the seat with a drift of prefernces from all other candidates making the seat once again a safe Labor seat which is good news for Lindsay Tanner.

The election was marred by Chief Commissioner, Steve Tully, who refused to provide statistical information on the number of postal votes issued (a document that is not confidential and in the past this information was readily avialable - see posts above) bringing both the VEC and the election into disrepute. Victorians and the new Parliamnet need to ask do we really need two public electoral offices duplicating what is essentially the same services at considerable cost to the state and the public purse. Judging by Mr Tully's performance the answer is no.

The Herald Sun reports that the Liberal Party have opted for opportunism ahead of Victoria's business and economic interests in striking a preference deal with the Greens to place the them ahead of Labor in exchange for the Greens issuing a split ticket in a number of rural seats.

The deal between the Greens and the Liberal Party places the Greens back into contention for the seats of Melbourne and Richmond (and possibly Northcote but less likely). This deal shows up the Greens for what they are and also brings tension within the Liberal Party/Business relationship.

In contrast to the McNair Poll (wee below) Chanel Nine's Morgan Poll indicates a different yet simmilar result. Morgan retains the ALP on 43% and shows a drop in the Liberal/National Party vote (38% down 2 percentage points from last week) but worring for Labor is that the Morgan Poll also shows a strong consolidation of the Greens (13% up 5 percentage points from last week a 3.8% increase in the 2002 result) at the expense of all other minor parties.

The Sunday Herald Sun published a recent McNair Gallop poll which (contary to all other polls except an earlier Galaxy Poll) reports a major shift in voter intentions and an unexpected reversal of voters intentions. If the Sunday Herald-Sun McNair poll is true then this is going to be a very close election indeed with the unexpected possibility that, as a result of the Liberal Party's preference deal, the Greens could play a major role in the formation of the next State Government. Again this poll is not backed up by credible results or independent analysis.

Labor's Bill Shorten has written an opinion piece on the need to elect a Labor State Government as the only means of ensuring necessary checks and balances against a Howard Liberal Party dominated Federal Government. 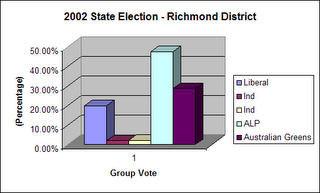 2004 Senate Election results:
(Note: Senate statistics is provided as information only to maintain consistency in the information published. The senate vote does not accurately reflect the possible outcome of the district vote) 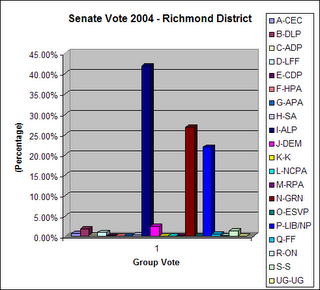 
The ALP has help the seat of Richmond since 1958, The current member for Richmond is Richard (Dick) Wynne, former Lord Mayor of Melbourne and a high profile Labor Party candidate.

The Greens' candidate, Gurm SEKHON, the only other candidate that could win the seat (see below) was elected to the local City of Yarra Council in November 2004.

In 2002 the Liberal Party who received less then 20% of the vote was out-polled by the Greens on 28% of the vote, with the help of Liberal party preferences the Greens secured a Two- Party-Preferred vote of 47% .

Whilst the Greens hope to win this seat in November the odds are against them.

Local feedback claims that the Greens have lost support as a result of un-popular local government issues inolving Greens candidates.

The 2002 State vote was the highest vote recorded for the Greens party. The Greens failed to capitalise on its support in this electorate with its primary vote dropping 2% to 26% at the 2004 Victorian Senate election. Unless the Greens can pull a rabbit out of the hat it will not secure this seat.

Remembered for his passionate opposition to the Kennett School closures since being elected to council Stephen has been out there attending community meetings and networking as much as he can., but being on the outer he has not been able to deliver much other then a voice for the disenchanted. He has a strong support base in the Richmond electorates high rise public housing estates.

The other unanswered question is can Steohen Jolly direct preferences away from Labor and towards the Greens. Any vote that Stephan does get could be a potest vote against the ALP in the Richmond electorate based on primarily on local issues. Local activitists say we can expect that Stephen's vote will increase but to what extent and at whose expense is hard to say, possibly around the 5% mark. Stephens vote will most likely come at the expense of both the Labor Party and the Greens with preferences flowing back to the party they came from. At best they might keep the Greens above the Liberal Party vote and force another Greens versus ALP contest.

The Donkey Vote: People Power head the ticket and will pick up the Donkey Vote, where voters start of the top of the ballot and vote down the list, estimated to be worth up to 1%. The Donkey vote eventually favors the Greens with the Liberal Party at the bottom.

The Liberal Party have no chance at winning this seat however the can and will effect the likely outcome and determine if there is a contest between the ALP and the Green Party. Definately a seat to watch. With two weeks to go in the campaign anything can happen. We will know more when registered HTV cards are finalised.