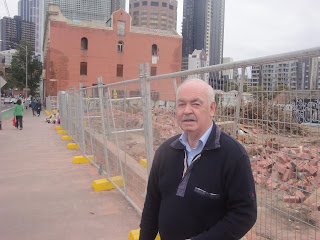 Trevor Huggard, Civil Engineer and former Lord Mayor of Melbourne, interview in the Age is worth reading to gain some insight into the Swanston Street Wall Collapse and the sites history, but it does not tell the whole story which hopefully will unfold in the fullness of time.

Trevor Huggard has a long standing interest in the CUB development site favouring it for the construction of Melbourne's State Museum  and the gateway to Melbourne's "Knowledge precinct" unfortunately this was not to be. 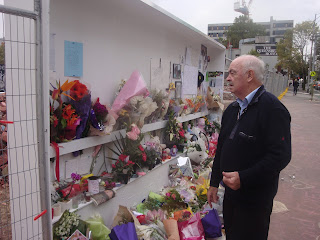 The Swantson Street CUB site has been hexed.  It has been one controversy after another.

It represents the worst of Melbourne's planning and city development and the Melbourne City Council's greatest failure.

The death of three innocent people last Thursday is just another sad chapter of the sites history.


Site Analysis prior to the Tragedy

Analysis of the Swanston Street CUB site conditions show a number of glaring flaws in its structure, design and layout all which may have combined to cause the collapse of the masonry wall which killed three innocent pedestrians on Thursday Match 28

The building site's hoarding along Swanston Street was reported to be 3 m tall, some 600mm taller than the maximum height of 2.4m for building site hoardings outlined in the City of Melbourne construction guidelines

The southern edge of the masonry wall was unsupported. There was no return or vertical bracing at this location. This was the weakest point and most likely the point of structural failure

The 25 meter plywood hoarding structure to the left of the Southern edge of the brick wall was subject to wind forces and would have acted as a lever against the brick wall's edge causing it to rotate.

The  recorded WSW wind speed in Melbourne on Thursday, March 28, was 76Km/Hour.

The location of a three-story high shipping container advertising structure on the right side of site, overlooking the CFMEU offices, would have deflected any wind gust concentrating its forces on the the hoarding board to the left and Southern edge of the brick wall .  The increased applied pressure at this point could have caused the wall to rotate and collapse.

It was a combination of all the above: Height, site layout, physical obstruction, poor design and construction of the hoarding itself and magnified applied pressure that concentrated on the wall at its weakest point.