Images published by the Herald Sun dated December 12, 2012 show that the brick wall in Swanston Street that collapsed from behind the hoarding. These cracks may have added to the series of structural failure contributing to the walls collapse, killing three innocent people. 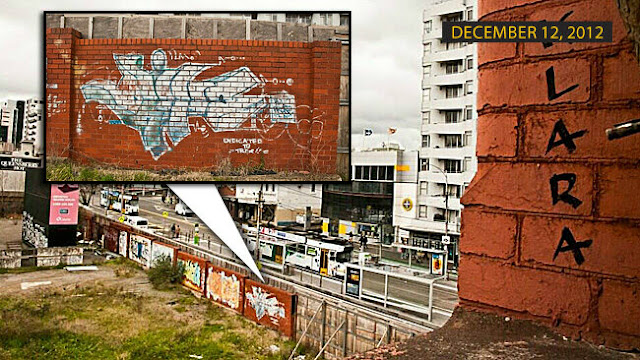 The exposed plywood panel hoarding  as shown on the right of the photo above had broken away when the wall collapsed. They were propped up by steel tubing anchored into the ground by star pickets, similar to support provided to a realestate advertising billboard.  Compare this to the hoarding on the western side of the site which has solid bracing anchored by large concrete weights. The wooden hoarding was attached to the brick wall with dyna-bolts.  Any movement of the plywood structure under wind load would have placed added rotational pressure on southern edge of the brick wall.  The cracks that have been identified would have further compromised the walls integrity

A permit is required under City of Melbourne Local Laws and Building site guidelines to construct a hoarding (Maximum height 2.4m) and the site should have been subject to inspection by Council Engineers.  The dead load weight of the hoarding, which was higher then the height permitted, added significant weight to the wall and would have contributed to the walls collapse.

Had the City of Melbourne inspected the site prior to and after the installation of the new hoarding the noticeable design faults would have been identified and the walls collapse could have been avoided.

The Lord Mayor and Council officers have gone underground refusing to comment on the walls collapse for fear of being held partly responsible and liable.

Calls have been made for the City Council to release all documents related to the CUB site and initiate a full internal and independent review of Councils legislative and building guidelines.
Posted by MelbCity at 14:54