Council replies but provides no answers

Why is Council footing the bill for the executive governance expenses of a third party orgainisation?

We received a half backed response from Cr Brian Shannahan, Chairman of the Council Finance Committee, re: Council Brindley's executive membership of a third party organisation and his proposed African Safari/Conference to our previous correspondence. (Addditional post) 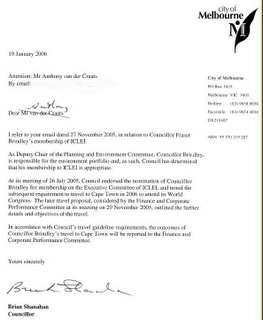 Cr Shanahan's reply failed to outline or provide an explanation as to why the Council is paying for the costs of Cr Brindley's executive membership of a third party organisation and under what provision of the Local Government the Council?

Cr Brindley was appointed to the executive of ICLEI (An international environment talk fest organisation) last year following the Melbourne's City Council's agreemeent to pay the cost associated with Fraser's Brindley membership which includes numerous overseas trip to attend executive meetings. (The African trip is budegeted to cost $9,000.00 for a five day Safari - thats just over a third of a Councillor's annual allowance)

It is one thing to be a member of this organisation attending the odd conference/junket but another for the Council to pay the "out-of-pocket cost" associated with the executive expenses of a third party organisation.


Surely ICLEI's executive expenses should be met by ICLEI and not the City of Melbourne. After all they are responsible for their own governance not Melbourne.

The City of Melbourne can find any excuse to pay any expense related to "fact finding tours" and the like if you take such a broad definition of a Councillor's duties. In our view the executive expenses of ICLEI do not fall under the provision of section 75 of the Local Government Act as they are not directly related to the role or duties of a Councillor.

Why can not Cr Brindley and ICLEI use internet video conferencing for their executive meetings as opposed to jet-setting off around the world, strutting the International stage at the expense of Melbourne ratepayers and the environment? A quick look at the Australian Conservation Foundation web site and you will see they recommend exactly that. Each trip abroad by Melbourne Green Councillor Fraser Brindley is equivalent to approx 15 trees.

In meanwhile the State Government takes no action to address community concern at the ongoing miss use and abuse.
Posted by MelbCity at 19:47