You should careful not to read too much into the report - When we did some research on previous years data we found some anomalies with the City of Melbourne statistics. It appears that they forgot to include some data understating the number of successful FoI application appeals.

FoI administration is not well managed down at Clown Hall and hopefully with the departure of Alison Lyons, Legal and Governance Manager, things will pick up.

We have written to the Melbourne City Council requesting an explanation and assurance that the information provided to the Minister is in fact correct and that the City Council has not deliberately or inadvertently mislead the Attorney general who in turn may have mislead the Parliament.

It is not clear if the Municipal Association of Victoria (MAV) is subject to FoI legislation, (if not it should be) if it is then we can expect that things will get a lot worst for the MAV in the not too distant future.

Some Interesting quotes from Hulls report.

The Bracks Government came to office determined to return openness and accountability to public life. Victorians had demanded nothing less and expected, quite rightly, that their democratic institutions would be returned to them - that they would, once again, feel able to exercise their right to access government information.
...
I noted in last year’s FOI Annual Report that the Victorian Ombudsman had commenced an own motion examination of the administration of FOI in Victoria. FOI processes and legislation – a relatively new and complex area of government - will always be a work in progress and I therefore look forward to the Ombudsman’s recommendations as to how we can continue to make improvements to this essential democratic mechanism.
...
The number of VCAT appeals lodged decreased by 11% in 2004/2005 when compared to the figure for the previous year. - Could it be that information was not correctly reported as has previously been identified with the City of Melbourne's statistical data?
...

The Attorney-General’s February 2000 FOI Guidelines to assist in the administration of the FOI Act require agencies to look to providing information outside the FOI process.

The existence of the FOI Act should not mean that the formal process provided under it is the only means of obtaining access to documents or information of an agency. 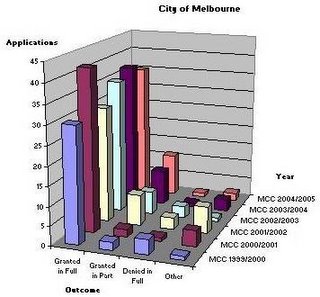 City of Melbourne published statistics for 2005 show that 78% of FoI applications were granted in full, 24% in part, 2% denied and 4% withdrawn (Note: There is a +/- 2% error in the published data provided by the City of Melbourne reason unknown - Creative accounting or poor bookkeeping is our guess)

Which begs answers to the questions

Is this not an ongoing abuse of process ?