The City of Melbourne would do well to read Terry Lane's opinion piece published in the Age on December 18, 2005 .

"Democracy, as we know, is government of the people, by the people and for the people. It's a noble concept, but how are the people to govern ourselves if we have no idea what's going on?"

Whilst Lane's comments are directed at the State Government they could have equally been aimed at the Melbourne City Council and many other Governments in Victoria - Green Councillor Fraser Brindley please take note.

Terry Lane's article is about obtaining information from Governments about government. All too often we see Governments try to dodge the bullets and fire storms by trying to shut out the public from knowing the facts - Governments that are not prepared to stand by the facts and record of their administration. The former Kennett Liberal Government made an art form of it and every other government has continued on with his approach.

Lane successfully quotes the former NSW Auditor-General, Tony Harris, who says: "It appears to me that governments just don't want to be accountable, and are using private sector participation and so are reducing the amount of information that's available. It is really outrageous."

To back up this statement Lane then goes on to quote Wayne Cameron, Victorian Auditor-General "An important element of the responsibility of the executive government is to make decisions affecting the direction and management of the state's financial resources and its operations. The government of the day, in return, has an obligation to account to the parliament and, in turn, to the community for its use of public funds and resources."

Terry Lanes sums up by proposing the question "What is it about politicians that they are such hypocrites and so averse to the very foundation of democracy that depends on the electorate knowing what is being done in their name? How can the cost of a major infrastructure project be kept secret? Are they ashamed of something?"

The same principle applies to obtaining information about Melbourne City Council's expenditure be it the cost of a major project development, costs associated with in-house catering, Councillors' overseas junkets or the cost of the Lord Mayor's Limo.

The City of Melbourne has forgotten the significance of public ownership and the right of public access to information.

Even worst is the fact that some Councillors, including Green Cr Fraser Brindley, believe it is OK to hold secret sessions behind closed doors in an attempt to prevent public scrutiny and the release of information related to the costs of the City of Melbourne's in-bound missions (the cost of inviting guest to visit Melbourne who are wined and dined at Councils expense).

Now were not saying that there is anything wrong with extending the odd invitation or two to someone to visit our city, and in the process show them a good time, but why does the City Council have to go out of their way to withhold details and information to the public on the extent of Council expenditure?

The City administration is mistaken in the belief that it is their professional responsibility to avoid disclosure.

Why is it that information on Council's costs and expenditure is only made available to the public via Freedom of Information legislation - this is clearly an abuse of process and responsibility.


Councillor Brindley should think twice before he sells out the many supporters who voted him into office.

Former Green Councillor David Risstrom demonstrated on many occasions his commitment to the public's right of access to information and proper process.

Sadly it was a question of timing David Risstrom stood down from the City of Melbourne to unsuccessful seek election as representative of Victoria in the Australian Senate and in the process he handed the baton over to Green Councillor Fraser Brindley. 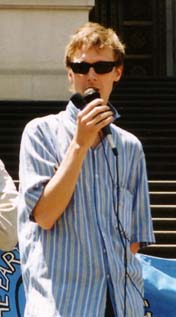 "The Greens support the integrity of local government as an independent level of government enabling full and active participation of the community in governance of issues at the local level. Such governance should embrace open and consultative decision - making, and provide for clear reporting of Council’s activities." - November 2004

Yes we all want a cleaner and healthier environment but there is more to good governance then half-baked policies on the environment. We also want honest, open and transparent government. We want to know the full extent and costs associated with the administration and governance of our city. We do not want information with-held and decisions made behind closed doors.

With the departure of Councillors Chamberlain and Kitchin the Melbourne City Council is no longer being held to account and as a result the public are worst off. Councillors Clarke, Snedden and Shanahan are fighting an up-hill battle only to be let down by Cr Brindley.

The Greens would do better to find someone that knows what they are doing, what their responsibilities are and who is prepared to protect the public's right of access to information.

David all is forgiven please come back.


I just saw your blog, having been referred to it by my local environment watch group, I was surprised and disappointed to hear that Fraser Brindley did not support the right of public access to management reports on Council expenditure.

At first I thought this was just another political attack on the Greens by the ALP until I did some research and verification of my own.

In reading the Council's draft minutes you were right Fraser did refer the report on Council's in-bound missions to the Councillor's Information Exchange Sessions (CIES).

I am told by my local environment watch group that the CIES is a non-official Councillor get-together before the Council meeting and was never meant to be an official meeting of Council only a preliminary discussion group.

The decision to refer the in-house expenses report to the CIES certainly does go against the principles of open and transparent government you have identified.

I support your concerns and believe Councillor Fraser Brindley owes us an explanation for his actions along with the reason why he did not agree with your request to publish the information recorded on the Council's Travel register as and when available.

I guess all politicians sell out their constituents and abandon their principles in the end.

They say one thing to get your vote and then forget about it once elected.

What's next Fraser Brindley will consider it OK and acceptable to avoid disclosure of a report, on some environmental issue or pet project, because it was not favourable or to his liking?

It's politicians like him that give the Greens a bad name.

Copy of letter sent to the Melbourne City Council with the "Brindley -Lane fortells a forboding message" blog attached.


The Lord Mayor and Councillors
City of Melbourne

Please find attached the latest posting on the "Melbourne City Council - holding them to account" blog for your information. http://melbournecitycouncil.blogspot.com

I request that this letter along with the content printed below be referred to the next meeting of the Council's Finance and Corporate Performance Committee for listing and consideration.


In addition I request that the next meeting of the Council's Finance and Corporate Performance Commitee consider the following recommendations:

Council review it decision to refer documents of management pertaining to council expenses on in-bound missions to the closed unofficial Councillor Infomation Exchange Session and that the management report detailing the expenses of in-bound missions be tabled in open session of the City of Melbourne's Finance and Corporate Performance committee. held in March 2006

2. Publication of the Council's Travel register

2.1 the Travel register be amended to include a record id number for each entry so as to assist in the identification and audit of the register to minimise any fraud, deletion or omission.

2.2 the Travel register include a break down of costs outlining the cost of travel, accommodation, conference fees and sundry expenses along with the allocated budget and reference to the instrument of authorisation approving the travel undertaken

2.3 the Travel register in fullfillment to the Council's commitment of maintaining a sustainable environment include a tabulated record of the estimated amount of Co2 emissions generated as a result of the travel undertaken by Council staff and Councillors. This information can ascertained by using a Co2 calculator readily available on the internet. such as Sustainable Travel International https://www.myclimate.co.uk/STI/op_carbonoffsets_offset.html

That a report be tabled in open public session at the Council's Finance and Corporate Performance committee meeting in March 2006 detailing in-house catering expenses for each department since December 1 2004 to March 1, 2006

4.1 That a report be tabled in open public session at the Council's Finance and Corporate Performance committee meeting in March 2006 detailing the costs associated with the lease, depreciation, maintenance, petrol consumption of the Lord Mayor's Limousine (including the salary of the Lord Mayor's driver) along with any other local travel expenses paid for by the City Council since December 1 2004 to March 1, 2006

4.2 That a report be tabled in open public session at the Council's Finance and Corporate Performance committee meeting in March 2006 detailing the costs associated with the lease, depreciation, maintenance, petrol consumption of the Deputy's Lord Mayor's vehicle with any other local travel expenses paid for by the City Council since December 1 2004 to March 1, 2006

4.3 That the costs associated with the lease, depreciation, maintenance, petrol consumption of the Lord Mayor's Limousine (including the salary of the Lord Mayor's driver) along with any other local travel expenses paid for by the City Council since December 1 2004 be listed and recorded in the published Councillor expense statements under the category of local travel.

4.4 That the costs associated with the lease, depreciation, maintenance, petrol consumption and the Deputy Lord Mayor's vehicle provided by the City of Melbourne along with any other local travel expenses paid for by the City Council since December 1 2004 be listed and recorded in the published Councillor expense statements under the category of local travel.

Terry Lane is enlightened! Get fucked.