The consolidated graph below shows that the City Council is on track to exceed the previous City Council has the City's big spenders with Overseas Travel continuing to be the biggest expenditure item. Councillor Jetter's Local travel costs of $13,706.14 not far behind. 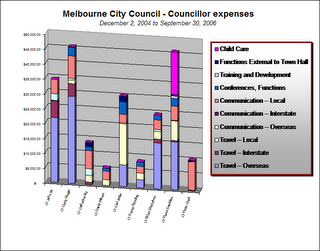 Missing from the councilors expenses is the costs associated with the Lord Mayor and Deputy Lord Mayor council funded limousines. Why these costs are not included we can only speculate that the City Council wants to keep the published costs down. What better way to reduce costs then to leave them out. We estimated the costs of the Lord Mayor and deputy Lord Mayors' ratepayer funded vehicles at around $150,000 per year.

Also missing is the cost of internal catering, free booze and free car-parking. No expenses spared for Our City leaders.

Previously the City of Melbourne was caught out in a review with 10's of thousands of costs that were not reported or included in the Councillor expense statements. When questioned as to the reason why this information was missing Linda Weatherson, Head of the Council's Governance Department, and the City Council Auditors claimed that the costs (although paid out by the City Council) had not been acquitted.

In our book a cost is a cost when the Council pays out but not according to the City auditors and Governance department. Creative accountants are alive and well in Clown Hall.
Posted by MelbCity at 20:47