Information from our elves in the Council's Governance department tell us that there is a serious split in the So team with Catherine Ng of the view that Garry Singer should go and that she should become John So's Deputy Lord Mayor. Catherine Ng is so furious it's reported that she is hardly speaking to the Lord Mayor at present. 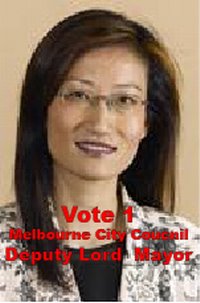 Whilst we have some reservations about Catherine Ng, her policies and actions, we recognise that Catherine Ng would make a better Deputy then Garry Singer. Catherine Ng was elected as John So's Lead Candidate on his teams ticket.

Garry Singer who was recently found guilty of professional negligence and fined by the Law Institute continues to bring the City Council into disrepute with an overal loss of confidence in his role as Deputy Lord Mayor. He has failed to live up to expectations and is often criticized by the other Councillors of not pulling his weight around the chamber. We understand if a vote of confidence was put before the City Council, Garry Singer would lose the vote.

The problem is if Gary Singer resigns the City of Melbourne will be required to hold a by-election to replace him, costing the City Council up to One Million Dollars.

This is a serious problem with the direct election model - one that the State Government failed to address when drafting its legislation.

If you have a dud elected for Lord Mayor or Deputy Lord Mayor, and for what ever reason Tweedle Dum or Tweedle Dee resign, under the current legislation the City Council has to hold a City wide election at great expense to the ratepayers.

We believe this is the reason why John So (as reported in the Herald-Sun) wants to restructure Councillor portfolio's so that Garry Singer will effectively become Deputy In Name Only (or DINO as he has now become to be known) Other Councillors are not so sure or supportive of John's idea.

Under John So's plan Cr Singer will have no responsibilities other then what he wants to do so long as he does not cause further trouble he can continue working the cocktail circuit and cashing on the City Council's invitations to Arts, Sporting events and the occasional delegation and trip interstate and overseas.

Clearly the Government must do something. Victoria's Local Government Minister,Candy Broad, must review the City of Melbourne Act and change it so that any vacancy in the Lord Mayor or Deputy Lord Mayor's positions can be filled by a vote of the remaining elected Councillors with a count-back of the original vote recorded at the General Election to determine who should fill the vacant Councillor position. This was the procedure before but now only applies to vacancies that occure within the last six months of the Council's term of office.
Posted by MelbCity at 11:20