Preliminary analysis of the Melbourne City Councilor's published expense statements show that John So, Lord Mayor, and Gary Singer, Deputy Lord Mayor, are set to break the previous Councils record of being the most expensive highly travelled Councillors in then State.

The Lord Mayor and his Deputy have already spent in their first year more then half of what was spent during the full term of the previous Council. If this keeps up they will most certainly become the leaders of leaders in who can spend the most whilst traveling overseas on the ratepayers tab, breaking all office records.

We have seen the trailers and are now waiting for the final cut.

We are still waiting for the Council to publish the Council's Travel Register (We are told it will be published today) When they do we can analyse further the full extent and cost of Council's overseas junkets and discuss the benefits. (The Travel Register includes staff travel and unlike the Councillor Expense Statements provides a cost break down per trip.)

Most trips (if not all) have been to China. We hope to see the Directors cut and not that of the City Censor.

We hope it has not been censored and that the data is in full and complete. We will compare it with the previous data and note the changes.

This and hopefully more when the Council administration finaly release the details of the Travel Register.

Current Council's expenses for their first year in office 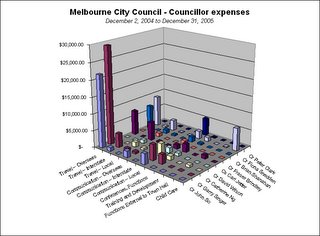 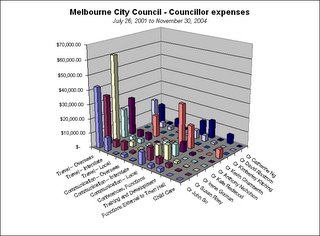 We call on the Council auditors to provide an explanation, its been well over two years and surely money paid-out is an expense and not dependant on Cr Nicholson providing receipts. If no answers are received soon we will ask the State Auditor General's department to investigate.