Prior to the lane closure on Princes Bridge it took less than 5 minutes to cross over the Yarra river and turn into Flinders Street. Since Princess Bridge has been reduced to one lane of traffic to accommodate a dedicated cyclist lane traffic congestion along St Kilda Road has increased along with the writing times.

The holding bay  outside Flinders Street Station is not filling up and flowing in a timely fashion. The time lag is what is causing  delay and congestion on St Kilda Road. 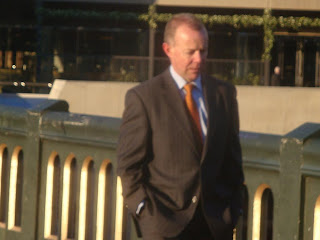 Geoff Robinson, Engineering Services Manager, said the City Council would tweak the lights sequencing which would resolve some of the issues identified but to date no changes as promised have been made.  There is scope for improvement in the traffic signalling but Council Engineering Services have failed to act.   Geoff Robinson is allowing congestion to remain and develop to encourage displacement. The number of cars using Princess bridge has dropped but the traffic times have not improved or stabilized. the number of cars filing up the holding bay and exiting Flinders Street is less then prior to the lane closure.  Contrary to claims made the Lord Mayor, Robert Doyle and supporters of the Princes Bridge lane closure traffic flow has not remained at ore-closure levels.

Any attempt to claim traffic volumes are at or comparable to pre-lane closure levels is false. 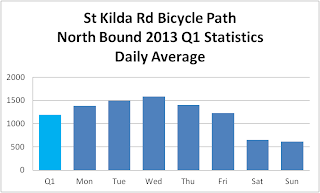 There is a noticeable 20 to 25% reduction in performance which should be born out by the statistics on the number of cars crossing Princes Ridge and the number of cars exiting into Flinders Street before and after closure. Already there are idications that Council will fudge teh fgurs to claim otherwise. wse have seen this with exagerated claim of the number of bicycles using Princess Bridge with the Hearld Sun reporting 5,500 bikes movements a day. when Vicroad's figures show less than 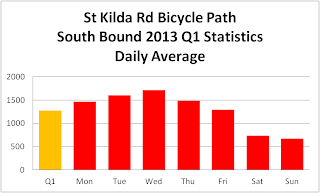 3000 bikes use the St Kilda Road bike path, a figure that has been confirmed by independent surveys taken before and following the establishment of the Princess Bridge lane closure
.

Statements made by members of the cycle lobby at Tuesdays Council meeting in which the Lord Mayor  sought to gag debate and review the proposed design and implementation strategy indicate that the tweeking and inflating of performances indicators is on already planned.
Posted by MelbCity at 06:07