Alfresco Dinning: with Rubbish Bin and Sign thrown into the mix - No extra charge 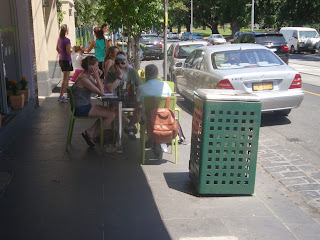 There is a Cafe that has to share its outdoor dinning experience with a rubbish bin and a street sign.

Another example of City of Melbourne's Street planning madness and stupidity.

A problem so easily fixed but traders and dinners left to suffer the Council's inaction.

Originally the site for the Local News Agent and Post Office the premises have been transformed into a coffee shop. The Council managed to change the parking sign which was previously reserved for Australia Post vehicles now it delineates the Western edge  a 30m is a loading zone.  (Enough space for 7 cars) 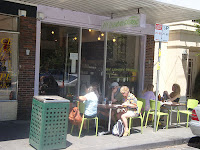 Next door to the outdoor tables is a smelling and filthy rubbish bin.  Enough to put you off dinning outside.

The new trader has been trying to get the Council to move the Sign and the bin but to no avail.

Months have past and still no action. It's a no brainer, one would think, it is not that difficult to see what the problem is and send someone out to fix it.  (It should have been addressed when they first removed the previous sign) 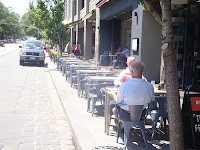 Meanwhile the adjacent Botanical Hotel, which obviously has some pull and sway with the City Council, has no such problems with signage as they enjoy a vehicle, sign free and no rubbish bin zone outside there premises. A 30 Metre Loading Zone is an overkill for such a small shopping strip.