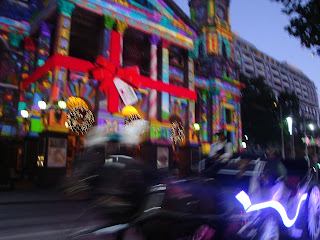 The Christmas Tree itself is a European tradition as is the commercialization of Santa clause which has surpassed the original meaning of the Christian Mass.

Putting aside the arguments of whether the Council should be promoting sectoral  religious beliefs the failure of the organizers to provide an Australian context to the festive season is unforgivable.

If they are going to spend 10's of thousands of dollars in a Christmas event then they could at least give it an Australian feel and theme. The staging of the Christmas event is lackluster, flung together with little thought and lacking imagination or creativity.  Score 2 out of 5
Posted by MelbCity at 22:19