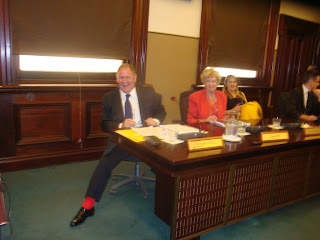 Melbourne's Lord Mayor, Robert Doyle, sporting a pair of red socks added a splash of color and sartorial elegance and fashion in what was otherwise a boring Council meeting.  (This addition to Robert's attire is solely due to the influence of his wife and should not be seen as a political statement)

There were only three items for public discussion on the Council's agenda, non of which were controversial or contentious.  Richard Foster's Citywide Smoking ban was not listed for discussion.

Maverick City Councillor, Stephen Mayne, still has not raised or addressed issues in relation to open transparency and the need for Council meetings to be open to the public.  The Council continues to hold secret behind closed doors Councillor Forum meetings and decisions made under Council delegation are not reported.  Complaints forwarded to the State Local Government Inspectorate in relation to the City Council's non compliance with section 89 of the Local Government Act are still pending review.