Nightmare on Swanston Street: Design Madness - What not to do..

Melbourne's Swanston Street's recent  26 Million dollar make over is a major safety hazzard and a classic case of poor design. It's hard to believe they got a design ward for the streetscape. Just goes to show you can get an award for anything.

Starting with the Tram 'Super Stops' come bicycle ramp.  Whoever came up with the design should be sacked or sent into academia.  It is a classic 'What not to do" in urban design.  Placing the stops in parallel has placed the precinct at risk.  If trams are on each side of the road there is no way an emergency vehicle can get access or pass the trams without having to crash over the footpaths and ramps.  If they remained diagonally staggered fire trucks, ambulances and police could weave through. In an emergency, where every second counts, just hope you're nowhere near Town Hall. 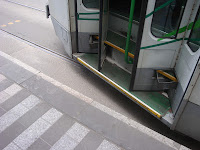 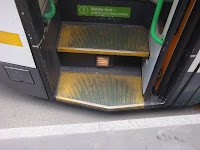 The Tram stops are an accident waiting to happen.  The raised profile does not fit.  Z Class tram's front entrance is a serious safety hazard with passengers running the risk of having their foot trapped between the tram and the platform There is no warning. You alight from the tram and you fall into a hole if you're not careful. Should you be unfortunate to be a victim of bad design call a lawyer.  The Council and designer would most certainly be liable. Yarra Trams must be worried as they also could be held to be liable for any accident. 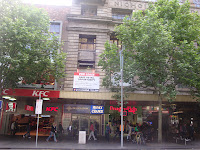 Swanston Street has a new set of 'Stainless Steel' Street lights. The design, nominated for an award, is totally useless in Summer.  They are positioned and so tall that they are hidden in the tress foliage and cast little light on the street.  The designer thought of form before function. 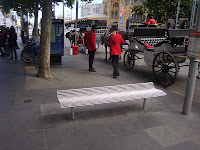 Swanston Street also has new street furniture. The new seats are made from Stainless steel and cost a pretty penny.  No expenses spared for Bamboo Rob Adams design team folly.  Being polished Stainless steel they will show up every scratch and rub as time goes by.  What's worse, in the midst of a hot summer day, in the full sun they are scalding.  Sit down at your own risk  As Melbournians will tell you Melbourne get hot in Summer with temperatures in the mid 30's to 40s. Even hotter in the full sun. You cold toast a bun on these heat sinks.


How much more must we spend on Swanston Street before they realize that it is not working? Will we have to wait until Rob Adams retires and hope that his predecessor will not following in his golden footsteps. King Ludwig he is not.  The sooner Professor Adams retires into academia the better.
Posted by MelbCity at 21:13