Melbourne's War Horse: The battle to remove Horse and Carriages from the City

The City of Melbourne - Engineering Services has embarked on a campaign of harassment and intimidation of Melbourne's Horse and Carriages.

Instead of supporting the Horse and Carriages the Administration is trying to run them out of town.

Previous elected City Councils have rejected the move,  recognizing the contribution and value the Horse and Carriage Street Traders provide to Melbourne Tourism and the vitality of the city.


Reflection on an era past, our history and heritage on a family day out or a romantic evening 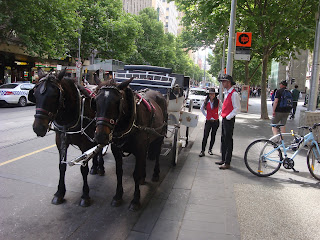 Melbourne stands alongside Paris, Prague and New York and is the only Australian Capital City that has Horse and Carriages in the City Centre.

The Horse and Carriages represent our heritage they remind us of the early days of the city's past when horse and carriages were the main stream of transport, a chance to experience a bit of history that made Melbourne.

Those that can afford to take a ride in a carriage enjoy the atmosphere that only a carriage ride can give as they ride down Swanston Street to the Shine of remembrance past the flower clock the Art Gallery and Concert hall.  A half hour Carriage tour of the City can accommodate a family of six to eight people or provide a slow paced ride for that special romantic moment for two to remember. 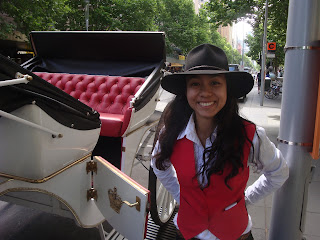 Children and Family Tourists in particular enjoy seeing the horses in the city centre. The smiles and expression of excitement that comes over the children's faces is hard to miss. As one person we spoke to said  "seeing the horses in Swanston street is like seeing a a bit of the Melbourne show every day of the year".

Since the departure of the State Museum from the City Centre there is very little that attracts families with children to visit the City  Apart from the Myers Christmas windows and New Years Fireworks there is not much that excites children visiting Melbourne. The City has become a sterile non-family friendly environment thanks in a large part to our City designers, planners and ill-considered decisions of State Governments past.

The administration Engineering Services has killed off Swanston Street and the town planners have forced families out of the City.  If you bring back families by providing  a reason for children to visit the city then this would have a balance and positive effect on the atmosphere of the Street.

The administrations war against the Horse and Carriage 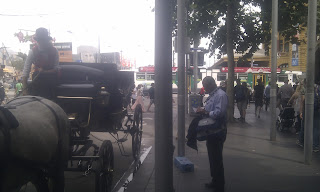 The administration in their war against the horses have consistently sought to harass the street traders on a daily basis by issuing fines (Some providers have over $10,000 in fines). The council by-laws officers have even harassed members of the public demanding their names and personal details when they are not employed by the Street Traders.

The parking space allocated to the horse and Carriages is restricted to two locations: the site outside St Paul's between Flinders Lane and Flinders Street and the site opposite the Town hall on the weekend.  The administration want the Street traders to move to the Queen Ann Garden precinct. A site that is removed from the city centre and  lacks commercial viability. 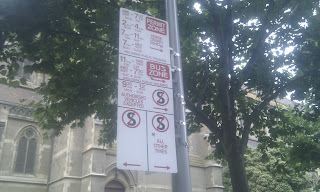 Half of the parking space allocated for the Horse and Carriages in Swanston Street is taken up by Police vehicles that use Swantson Street as a department car park.  This has placed pressure on the Traders who have nowhere to park so they stop on the other side of the road outside Young and Jackson's whilst they wait for a spot to become vacant on the other side of the road.  The City Council is quick to have bylaw officers drop in and issue a fine $100 for parking in a non-authorised location and a further $1000 for breach of their permit.  Police vehicles and taxis illegally parked in the horse and carriage parking area are never fined.

The problem is the administration not the elected Council 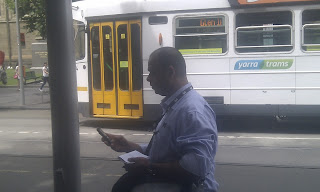 It is important to note that the harassment and opposition to the Street Traders is not coming from the elected Council, the problem is the administration.

The administration hold meetings behind closed doors. Policy discussion is not open to the public and there is no open transparent consultation with the Street Traders or the general public.

Christmas can be and is a danger zone for public policy.

The administration seek to drive the horse and carriages from the City Centre by pushing through their policy to outlaw them, taking advantage of the lead-up to Christmas and the honey moon period of newly elected Councillors.

Councillors Kevin Louey, Ken Ong, Richard Foster, Beverely Pinder-Mortimer and Jackie Watts all support the continuance of Horse and Carriages in the City .  It is unclear where the Lord Mayor -Robert Doyle, Deputy Lord Mayor - Susan Riley, or Councillors Arron Wood and Stephen Mayne stand on the issue, but we believe they are also supportive of the Street Traders.

The Green "Christmas Grinchs", Councillors Cathy Oak and Rohan Leppert, are opposed to horses and any other form of transport except bicycles and trams in the City.

Our Street Traders, the horse and carriage operators are an asset not a blight.

What the Council needs to do is support our Street Traders, not harass them, The Street Traders want the City Council to relocate responsibility for Street Trading from the Engineering Services Department and place them under the auspice of the department responsible for Tourism and business where they rightly belong.