Being Ernst and Young

The report confirms what everyone has known but the City Council refused to acknowledge. It cost the City Council over $300,000. This report, well worth the read if not the cost, will become a road map by which ratepayers and the State Government will review the performance of the Council and to senior management. 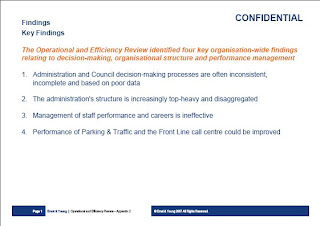 To date the report card is not looking good. We have seen a continued reduction in the working capital of the City Council and a ever expanding costs and wasted expenditure.

Can John So turn the sinking ship around before it goes bottom up?

John So has tried to place the blame on the CEO claiming that the CEO is responsible for staff management and Council finances. It was only two months ago that John So and the City Council resolved to extend David Pitchford's employment contract (be it for a reduced two year tenure). If the Ceo performance and financial management has been so bad that John So now finds it necessary to cast blame on David Pickfords performance then why was his contract renewed and why didn't the City Council put to open public tender the Ceo position?

The Fact remains that John So must share responsibility for the financial blowout. Under John So's term of Office Melbourne has seen a massive increase in staffing and expenditure. increased income from expanding property values and rate revenue have underpinned the Council's exuberance and excess. Now reality hits. If the Council fails to act and reduce costs the City Council will be bankrupt in ten years time. Increases in property values and expansion of City development will not save the council from it's financial fate. Hard decisions need to be made. Decisions that are made worst by John So's negligence and high expenditure.

The State Government must also act to address the situation. It is not just the City of Melbourne that is under financial pressure other city Councils also are feeling the burden of keeping rate increases to a minimum whilst delivering essential services. Many Councils can not afford the luxuries that the City of Melbourne forks out. Councillors and Staff are treated to numerous benefits, free meals, free booze and 5 star overseas "Fact Finding Excursions" the lord Mayor and Deputy Lord Mayors have an all expenses paid limousines and a full time drive costing $100,000 a year at the Lord Mayor's disposal. (the costs of which is not disclosed in the Council's published expense statements).

The State Government needs to fulfill its promise to the electorate in the lead up to the 2006 State Election. Melbourne City Councils external boundaries need to be reviewed along with its representative model.

Councilor Peter Clark highlighted the issue when he called for public debate on the creation of a Greater Melbourne and efficiency gains in planning and finance that would benefit Victoria and Melbourne Inner City development.

Cr Clark's motion was scuttled by John So, who refused to allow debate and consideration of a Greater Melbourne and review of the City Council's representative model.

The State Government must reject John So head in the sand approach and initiate a review and encourage debate about the possible merger of inner city municipalities as a way of generating greater efficiency and service delivery to Melbourne.
Posted by MelbCity at 02:35