Melbourne Bus and taxi operators have expressed concern about the safety of its passengers if the Melbourne City Council's proposed St Kilda Road Bike Lane development is allowed to proceed. 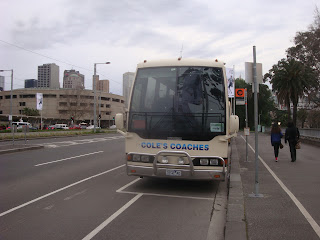 The proposed design is a serious threat to the safety of passengers exiting the bus with passengers having step onto the 1 metre stone separation barrier, then wait to ensure there are no bicycles bearing down on them before crossing the 3 metre bike path on to the adjacent footpath. The situation is worst when there are 40 other passengers all wanting to exit the bus at the same time and would even worst again in an emergency situation.

Bus and taxi drivers are joining the chorus of other community groups  opposed to the proposed $330,000 bike plan design which is scheduled to be installed next month.

Residents, business and community groups are calling on the City Council to scrap the plan and hold am open public review of the proposal.

Community advocate and former City Councillor David Nolte has said that Cr Richard Foster has expressed concern at the proposal and t bis understood he has asked that the matter be brought before Council.

Other Councillors have also expressed concern but said that the issue was in the hands of the Lord Mayor Robert Doyle who was opposed to any review in spite growing concern over its impact on public safety.

Cr Stephen Mayne, who claims to be an advocate for open and transparent government, was not prepared to discuss this issue.

UPDATE: Cr Foster as indicated that he will be calling for a halt to the project and that a report be presented in detail at the next Future Melbourne Committee
Posted by MelbCity at 18:46