The Editorial in the Herald Sun ends with a very very good idea in how to save on the City Council's Budget.... John So can save over $250,000 dollars in annual costs just by Scraping the Lord Mayor and Deputy Lord Mayor's Limos .... Great idea. 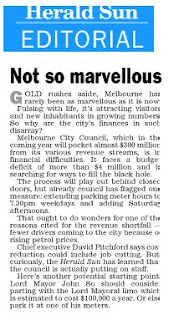 GOLD rushes aside, Melbourne has rarely been as marvellous as it is now.

Pulsing with life, it's attracting visitors and new inhabitants in growing numbers. So why are the city's finances in such disarray?

Melbourne City Council, which in the coming year will pocket almost $300 million from its various revenue streams, is in financial difficulties. It faces a budget deficit of more than $4 million and is searching for ways to fill the black hole.

The process will play out behind closed doors, but already council has flagged one measure: extending parking meter hours to 7.30pm weekdays and adding Saturday afternoons.

That ought to do wonders for one of the reasons cited for the revenue shortfall - fewer drivers coming to the city because of rising petrol prices.

Chief executive David Pitchford says cost reduction could include job cutting. But, curiously, the Herald Sun has learned that the council is actually putting on staff.

Here's another potential starting point: Lord Mayor John So should consider parting with the Lord Mayoral limo which is estimated to cost $100,000 a year. Or else park it at one of his meters.
Posted by MelbCity at 13:06